QR Code Reader
I usually use the app QR Code Reader on my phone, because it was the first result when I searched "QR Code" in Google Play so long ago!  Still, it often takes a long time for the content to load and I get frustrated, so I decided to check out the RedLaser Barcode & QR Scanner to see if it was any different.

I have an awesome staff member who creates great displays with QR codes, such as this "readbox."  Yes, she's really creative; play on words with redbox, ha ha! 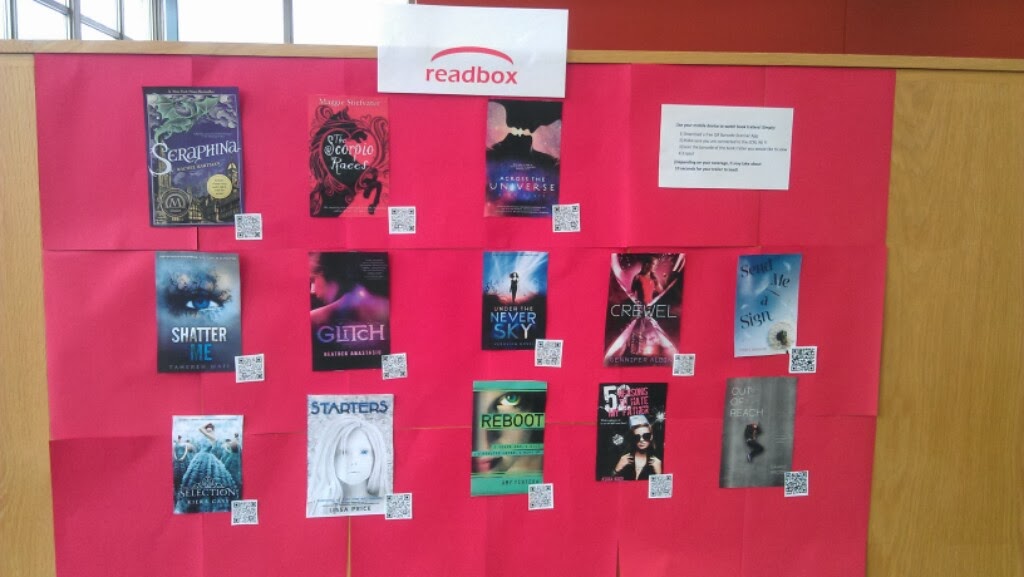 She puts a cover image of a forthcoming/popular books along with a QR code she created using a QR code generator, which RedLaser also offers.  The QR code takes you to a YouTube video of the book trailer.

I don't see myself using the search function on RedLaser to shop for local deals, and actually see it as an annoying distraction, but I was impressed by its lack of lag time when scanning a barcode/QR code.  It will be nice to have a reliable app to recommend to patrons so they can reap the benefits of these displays as well!

RedLaser also has a "loyalty card" function, where you can store cards you use frequently, from a predetermined list of national merchants or by adding your own card info such as from a library card.  I've only seen patrons come in and want to use them a handful of times.  One library system I worked for decided not to allow apps in place of library cards, the other decided to allow it, with the plans of creating a policy/procedure if it became a bigger issue than one solitary patron.  Does your library allow patrons to use apps with stored card info in place of their physical library card?  SHOULD we allow patrons to use stored card info?

Google Goggles
In terms of utility, I don't see how Goggles is all that different from a QR code/barcode reader.  Sure, it eliminates the need for someone to actually create the QR code. But it also eliminates the control over where the QR code takes you.  Taking an image of a book cover will take you to the Google results for that book, not to the specific book trailer we wanted you to see.

From a user's end, Goggles doesn't save much more time than a voice search.  And I don't often find myself somewhere where I have don't have the basic info I need, and only an image will save me!

However, I sure did have fun scanning pictures of my honeymoon on Kauai to see how many pictures Goggles recognized from around the island!  I'll be interested to see what ideas others have for how to use Goggles.


StandApp
Though most days, I am on the desk, and standing, StandApp is a great option for days/periods of time where I am sitting at the desk or even when I am at home nights and weekends, watching tv, paying bills, writing my 23 Mobile Things blog...

I like that the reminder alarm is the same as your text message allert, and thus, not very intrusive.  It actually makes it possible to use in the workplace.  Rather than the videos of the exercises though, I would prefer a quick written explanation only.  That way, you can also use the break as a break from screen time, something we all need once in a while!  The exercises are simple enough that if you use the app regularly, you should memorize them pretty quickly.

iHome Sleep
The only positive thing I can see about this app is that my husband may be better able to realize how little sleep he functions on!  Other than that, I like to stay away from any screen time for at least 1/2 hour (preferably longer) before bedtime.  Screen time before bed keeps you awake longer and interferes with the sleep you do get when you get it.  And I know I don't have the self-discipline to just bring the app to the forefront, without checking text. email, Facebook, Insta, or Twitter one last time before bed....

I also did not get the warning that the app had to be running in the forefront to work.  If I was actually using the app rather than testing it out, I would have been in trouble!

Wi-Fi Finder:
Great concept if you are traveling or looking for a free wi-fi in an unfamiliar city to connect your laptop/tablet without a data plan or a smartphone without an unlimited data plan to. However I downloaded the app yesterday, and there was no option to download the database offline.

Ultimately, the only two apps I will be keeping on my phone are the QR Code Reader and StandApp!  Ready to move on to Keeping Up!
Posted by Sarah Hawkins at 8:19 PM