I did it!  Completed my first 23 Things program, courtesy of the Minnesota multitype library systems.  I'm already looking forward to another learning program in the future.

Posted by Sarah Hawkins at 8:18 PM No comments:

Hobbies...other than reading you mean?  Well, then that would be mixed marital arts (MMA), specifically the sports' biggest organization, the UFC (Ultimate Fighting Championship).  I love it.  I watch it on TV and live, I read and watch the news stories all week long, I follow fighters and journalists on Twitter.  Basically, I just can't get enough.  If you follow me on Twitter, you probably already know this about me.  If you don't know that about me, it might come as a shock.  A librarian who loves to watch some of the most athletic guys in the world fight in the cage?  Yep. In my opinion, its the best sport for fans, hands down! iJudge Fights is an app that lets the fans judge fights for themselves (round by round) as they are happening, and then compare your score to other users and experts.  It covers all of the major MMA organizations: UFC, Bellator,  Invicta, and more.

I tried this app for the first time more than a year ago, but it kept freezing up and not submitting my votes so I deleted it.  I decided last weekend's UFC Fight Night: Shogun vs. Henderson II was a good time to try it again!

Starting with the first fight on the fight card, all the way to the last.

Fights can be stopped a number of ways: a fighter is knocked out, goes unconscious due to a Brazilian Jiu Jitsu hold, taps out due to a BJJ hold, doctor stoppage, the ref steps in, etc.  If the fight goes the distance, the winner is determined by the judges' scores.

Following the Unified Rules of Mixed Martial Arts, bouts are typically three 5-minute rounds, with championship fights at five 5-minute rounds.  It is a 10 point must scoring system, with the winner of a round scoring 10 points, and the loser scoring 9 or less.  Rounds are scored based on: effective striking, grappling, agression, and cage control.  At the end of the fight, the judges submit their total scores for each fighter.

This was the fight card lineup for UFC Fight Night last week, with the main event listed at the top and going down from there. 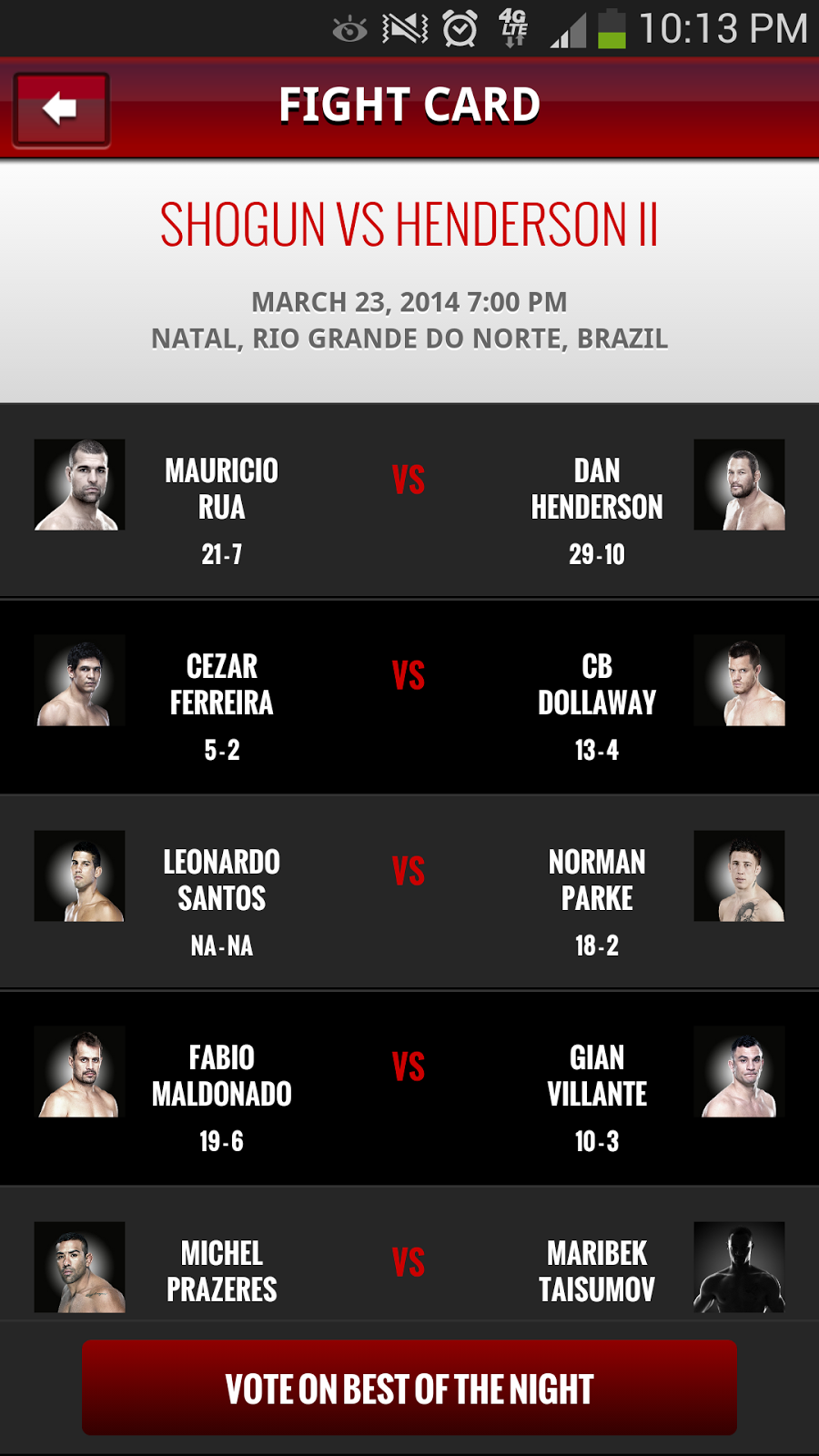 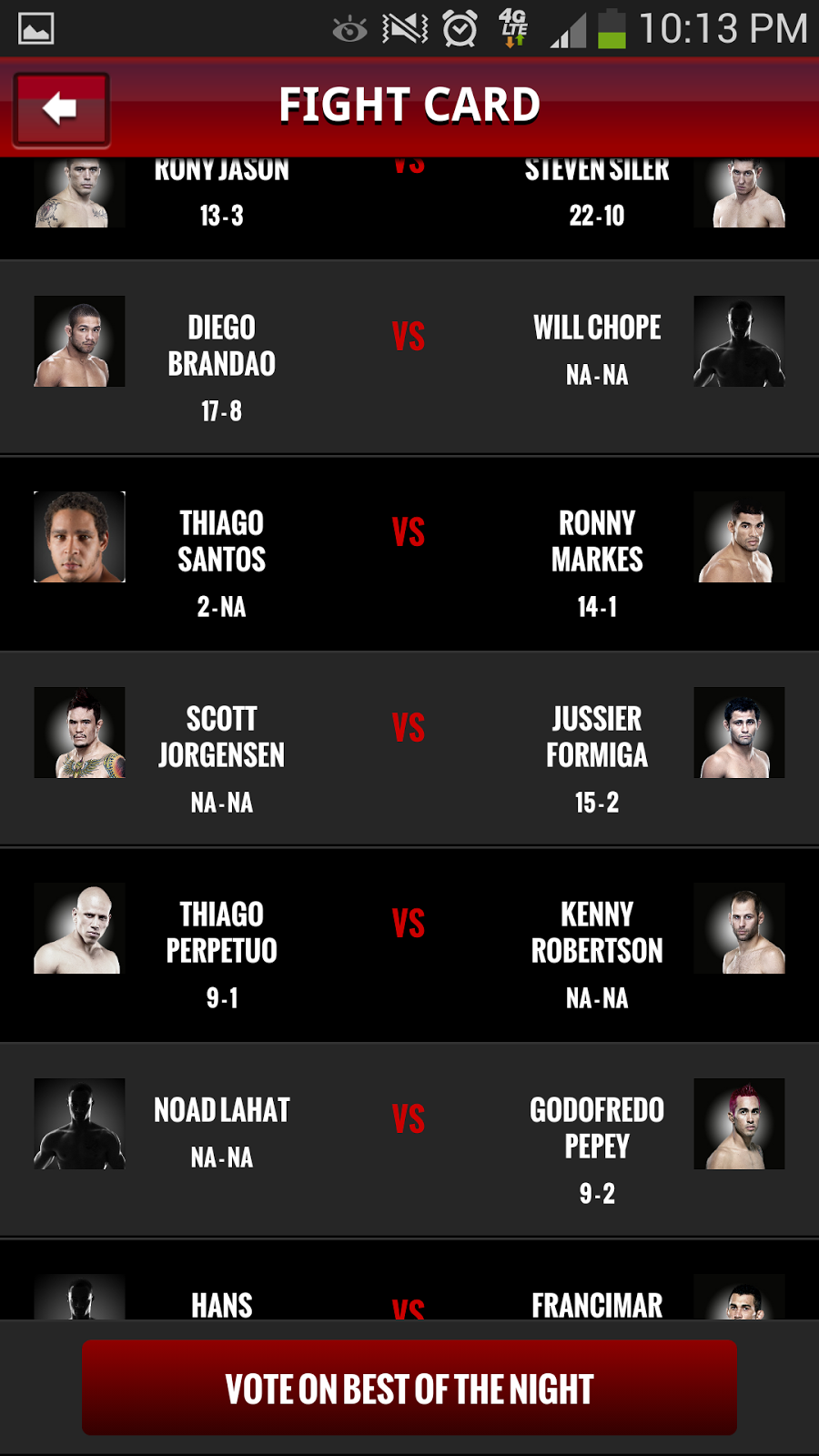 This app allows fans to judge fights round by round, giving 10 points to the round's winner and 9 or less to the loser. You also can move the slider in the middle for grappling, striking, agression, and cage control.  In Round 1 below, my opinion was that Prazeres did all 4 better and completely, so I moved all the sliders 100% over to his side. 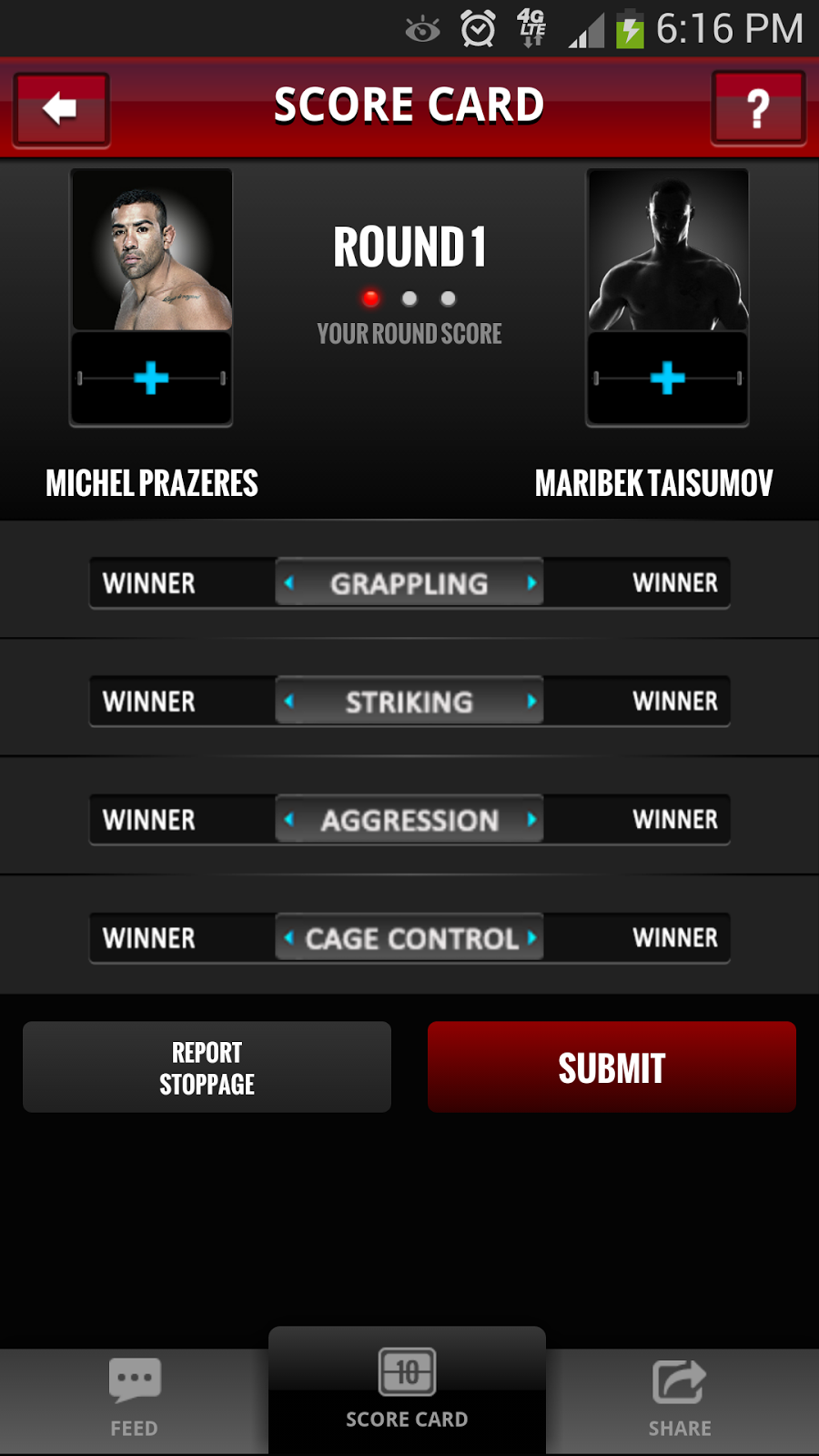 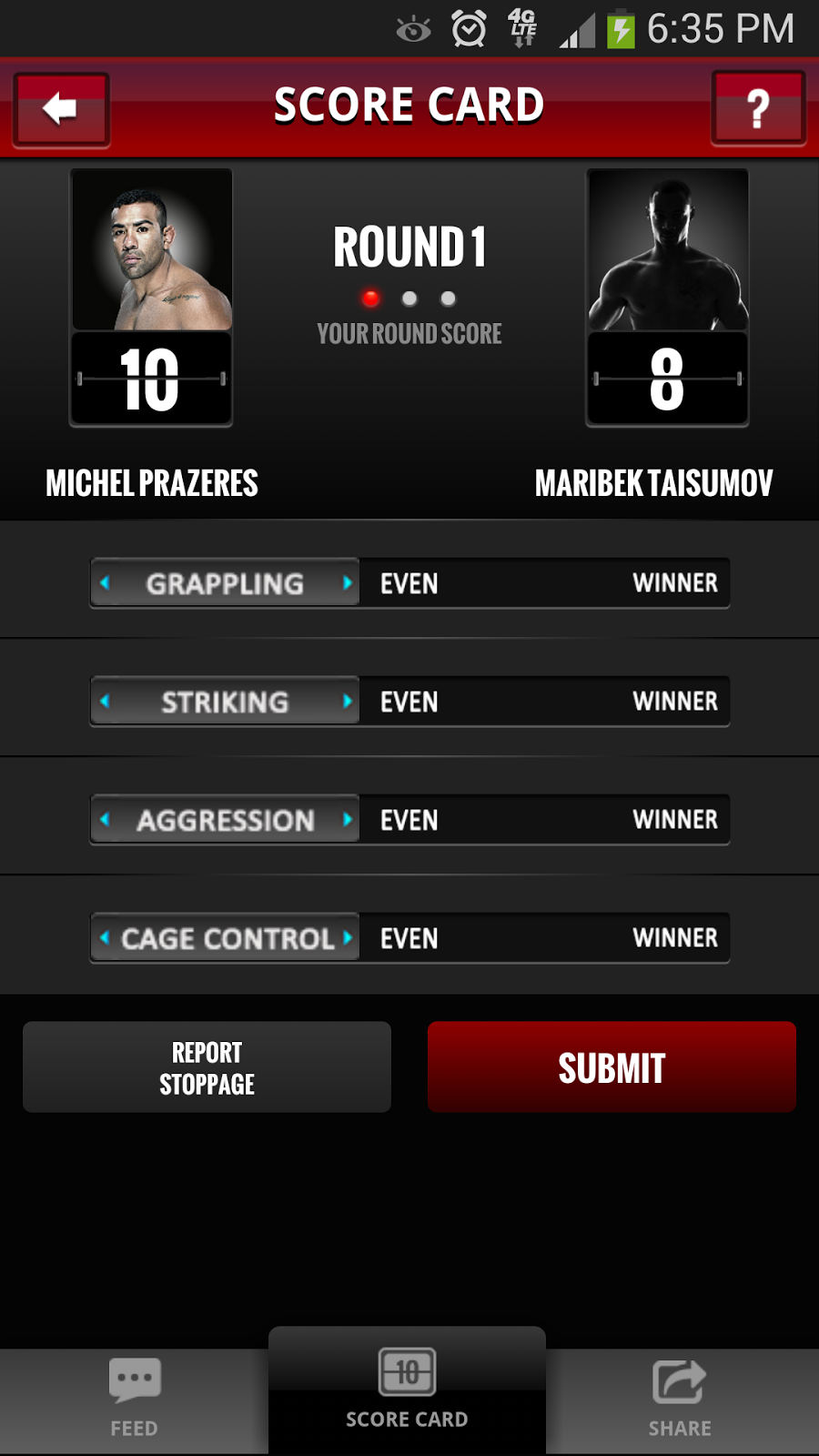 After you submit your opinion for each round, you can see how your judging stacked up against the iJudge Fights consensus, the experts, and your friends.

If a fight doesn't go the distance (complete all 3 or 5 rounds), and gets stopped due to tapout or referee stoppage, you "report a stoppage" and then judge the timing of the stoppage and rate the finish from 1-10.  Judging the timing of the stoppage means, did the referee step in too early because the fighter could have recovered?  Did he step in too late because the fighter was clearly injured or knocked unconscious?  Did the ref step in at the right time?  And finish points really is a matter of opinion.  Was it a flashy KO?  Will we be talking about that submission a year from now?  I tend to be much stricter on my finish points than my husband. 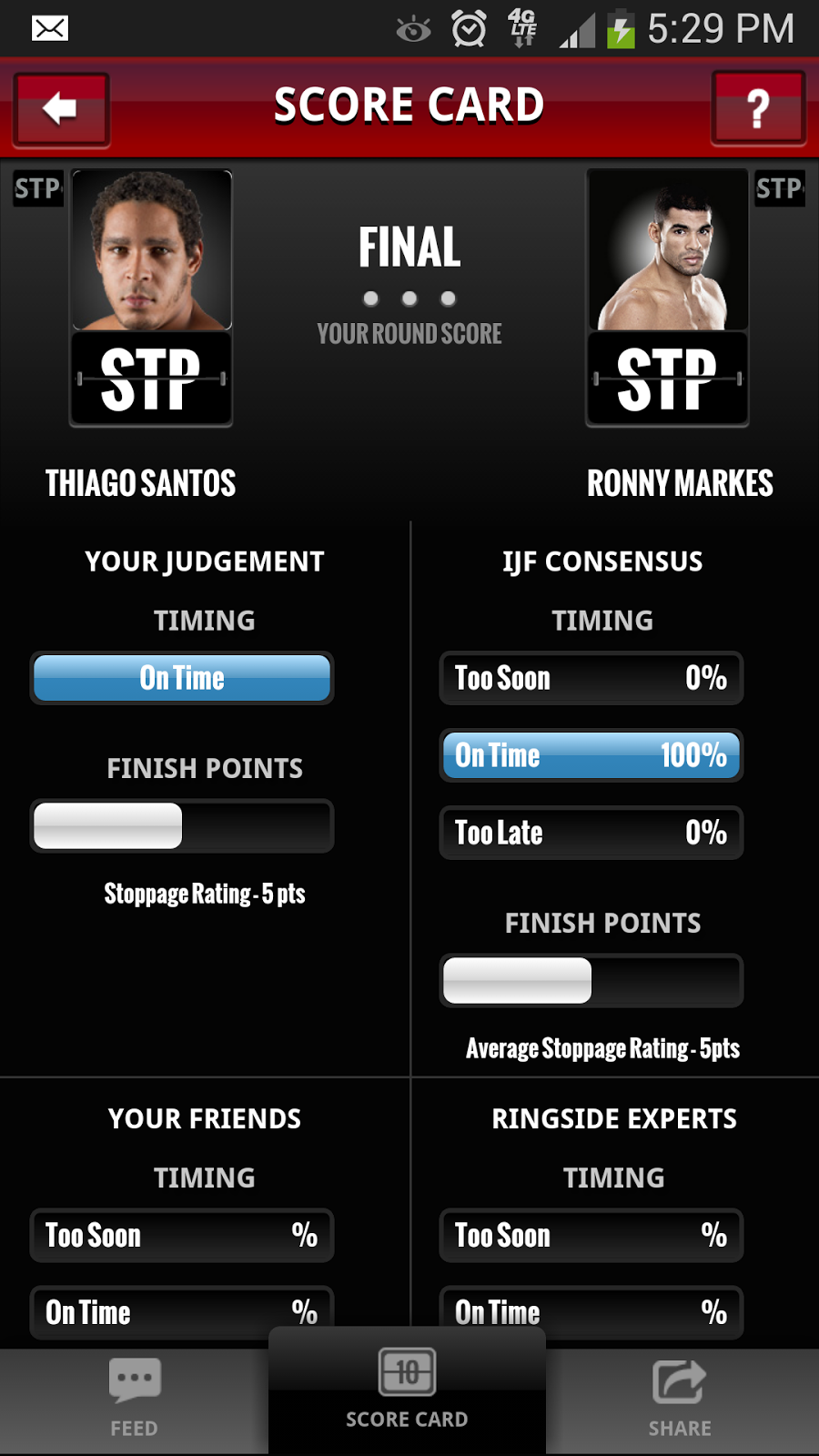 All in all, this app gets two huge thumbs up from me!  We loved having this app out to play along throughout the fight card, get involved, and see how good we are at seeing what is happening in the fight.


Posted by Sarah Hawkins at 7:54 PM No comments:

Droid of the Day
I've had the Droid of the Day app on my phone for more than a week now.  Each morning I wake up with an alert on my phone telling me what the app of the day is.  From the Dormi Baby Monitor to a game with physics (Domingos) to Mixology drink recipes, this app certainly gives you a variety.  You can also access the list of previous DOTD apps.  You're bound to stumble across something you just have to have...eventually! And in the meantime, you can laugh at all the stuff people spend their time creating, so others can spend their time wasting! 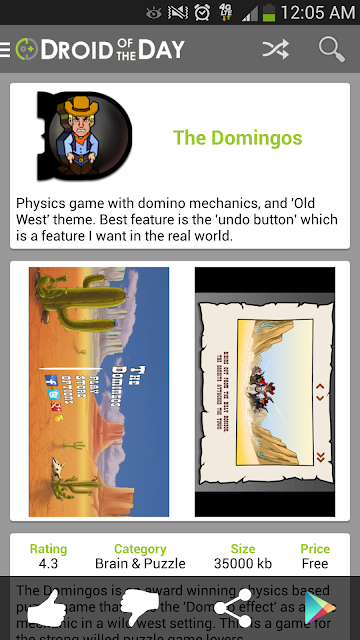 Quixey
This app is more my speed.  I guess there's not a lot of browsing or serendipitous use on my phone.  Usually, I know what I'm looking for.  It's nice to know if there's an app I'm looking for, Quixey is the app to find it.  I'm guessing many of the apps for 23 Mobile Things MN were discovered using this app?
Posted by Sarah Hawkins at 7:17 PM No comments:

Email ThisBlogThis!Share to TwitterShare to FacebookShare to Pinterest
Labels: 23thingsMN, Droid of the Day, Quixey

Posted by Sarah Hawkins at 1:20 PM No comments:

Necessary apps
Apps I couldn't live without?  All pretty simple ones that help me live my life on the go...Gmail, Wells Fargo (to find the nearest ATM), Walgreens (to reorder prescriptions), Redbox, Target, and DirecTV (for those panic moments when I forget to record my must-see shows!).  I would guess most participants have similar apps for brands/companies of their choice.

Apps I love
The apps that 23 Mobile Things MN didn't include, that I love, and that I think a lot of other librarians use or would love to use ...Goodreads and IMDB.  Because if there's one thing librarians love more than books or movies, its making lists of books and movies.  We love to organize, review, and rate content.  We love discovery tools.  And these apps do both.  I have no idea how I would keep track of what books and movies I have read/seen, want to see/read, am currently reading/watching without these apps!  Goodreds especially also has the social element so that you can share your choices, opinions and reviews with friends.

Newly discovered cool apps
Finally, I attended the LibTech Conference at Macalester last week, and learned about two cool new apps I am looking forward to incorporating into my work life. At the "When Every Student has an iPad: Impact on the Library" session, librarians from Globe University discussed how they incorporated iPads in their info lit instruction sessions after their campus' initiative to issue every student an iPad.  Namely, they use Socrative and  Nearpod, both interactive student response systems.  As they said, if you give students an iPad in class, but don't give them something to do with it, you will lose them as they will be using the iPad for Facebook, surfing the web, etc. By incorporating interactive presentations into your lessons, and allowing students to monitor their own understanding, they are engaged in the learning process.   Our library system owns a handful of Nook Colors, which both of these apps are compatible on, and users often have their own devices.  Though I don't have "students" per say, I can see myself using either or both of these apps in staff or patron training.  Actually, I can't wait for my next training opportunity to try these out!

Posted by Sarah Hawkins at 1:31 PM No comments:

I love game nights with friends and family, playing CatchPhrase, Taboo, Wits & Wagers, Bezzerwizzer, and more.  Computer games is a completely different story.   I'm constantly getting invites from people to play Candy Crush, Mafia Wars, etc.  Of those, I've tried just Dice with Buddies & Words with Friends, that I play for a while and enjoy, but the truth is, I'm not much of a computer games person.

Word Games definitely hold the most appeal to me, so I tried Word Collapse.  I would've tried Wordmaster too, but it wasn't compatible with my device.  For what Word Collapse was, it was pretty fun!

You are given a puzzle that contains hidden words based on a theme.  Your job is to find the hidden theme words within the puzzle, and do so in the right order.  As you find words and select them, those letter tiles disappear and the remaining tiles move together.  If you eliminate words in the wrong order and run out of moves, you have to start over at the beginning of that level.  Word Collapse reminded me of the Bejeweled, except for with letters not shapes?  There are 10, 20, or 35 levels within each theme, with more letters in the puzzle and more words to find within the puzzle as you increase in level.  The "starter pack" or free version of the game has 15 themes for 185 puzzles.  It didn't take me much longer than 10 minutes to complete the first three themes of animals, fruit, and cities, so I'd guess it won't take me very long before I complete the free version completely.
Posted by Sarah Hawkins at 7:44 PM No comments: